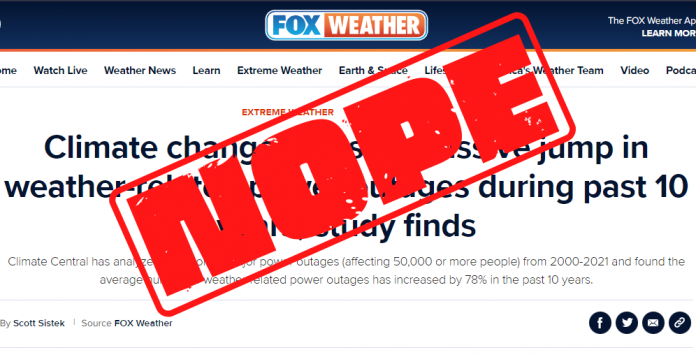 A Google news search for “climate change” this morning found an article by Fox Weather asserting that climate change is causing more power outages across the United States. This is false. While it is true that the number of power outages across the country have been increasing in recent years, data show weather has not been worsening, so more frequent or severe extreme weather cannot be blamed for rising blackouts. The true culprit is climate policies resulting in the replacement of reliable power plants powered by coal, natural gas, and nuclear energy with power from intermittent wind and solar facilities.

The article, “Climate change leads to massive jump in weather-related power outages during past 10 years, study finds,” discusses a study by climate alarm group Climate Central that claims increasing power outages are due to climate change. Tellingly, the group’s website describes them as using “science and technology” to create “storylines” for local news, along with “compelling visuals that make climate change personal.”

“Climate change is increasing the frequency and intensity of extreme weather that wreaks havoc on our power grid – from wildfire to heat waves and hurricanes,” the study’s authors wrote. ‘”As (climate) conditions continue to shift, (electrical) systems will be exposed to more extreme weather throughout their operational lifetimes,’ potentially limiting capacity to meet demand,” Fox Weather says.

This storyline is fiction. It doesn’t even have enough “science” underpinning it to be considered science-fiction. Data on extreme weather show no worsening trends.

Climate is an average of weather over a thirty-year period. Individual weather events are not attributable to climate change, but trends in weather over decades are. Climate Realism has discussed the data on extreme weather listed in the article; drought, thunderstorms, hurricanes, and winter storms, for example. None of the extreme weather events discussed shows an increase.

Taking thunderstorms and similar land-originating severe weather involving wind, rain, and lighting, which the article claims are responsible for most of the power outages, the U.N. Intergovernmental Panel on Climate Change (IPCC) AR6 report says there is no evidence that thunderstorms are worsening or that changes in thunderstorm frequency are attributable to human causes. In fact, the IPCC identifies no trends in thunderstorms at all. Similarly, the report found no detectable increase in extreme winds, lighting, hail, or flooding commonly associated with bad weather, despite their finding that “heavy precipitation” over mid-latitudes has increased.

If a climate change isn’t causing an increase in the frequency or intensity of extreme weather, then it can’t be responsible for the increasing number of power failures. So, what is? Among those factors are inadequate grid maintenance and the replacement of fossil fueled power plants to provide baseload power with unreliable renewable sources.

First, consider increasing strain on an aging grid, that has not been well maintained in many parts of the country. Downed power lines in California contribute to wildfires, for example, and on the opposite coast Maine has an electric system that is more than 50 years old, in parts.

A second critical factor behind the decline in grid reliability, arguably the most important one, is the increasing proportion of the electricity supply that is dependent on unreliable, intermittent sources, like wind and solar.

The Fox Weather article cites grid problems Texas and California as proof climate change is contributing to outages, but they are, in fact, both examples showing how flawed climate policies are driving most outages. Climate Realism discussed the problems with California’s increasingly unstable grid, here for instance. California’s increasing reliance on less reliable energy, along with the push to ban even small gasoline powered lawn equipment as well as cars, puts increasing strain on their grid because more and more people are using electricity to charge things, even as ever more amounts of reliable power plants are being taken offline.

Texas is hardly any better. In fact, as rightly pointed out in the article, Texas suffers from the most power outages, followed by Michigan and California.

Wind power generation makes up roughly 23 percent of electricity generation in Texas, as a result of state and local officials encouraging a more than doubling the wind power capacity since 2015. Simultaneously a number of coal fueled power stations, unable to compete with highly subsidized wind facilities, were prematurely shuttered. Wind power is obviously highly weather dependent—if the wind is not strong enough, or if it is too strong, no or significantly less power is generated. The wild swings in generation put strain on the transmission system, and weather-related outages occur when turbines freeze, as in the case of the ice storm of 2021. More recently, a heatwave and high-pressure system caused winds to drop off, resulting in Texas’ wind facilities producing just 8 percent of their installed capacity. As a result of wind power’s repeated failure during peak summer season this year, Texas’ electricity regulator had to issue multiple warnings to conserve power and limit appliance use to specified times. Still power outages occurred sporadically in small areas across the state.

Although organizations like Climate Central ignore the role climate policies have played in the rising number of power failures, grid operators acknowledge that the rapid pace of shutting down coal, natural gas, and nuclear power plants is contributing to more blackouts. These dependable sources are being phased out in favor of predominantly wind and solar.

Climate alarmists are exacerbating the problems that they claim they want to solve, by making our energy systems even more weather-dependent. Is this coincidence or is it further evidence that they are really more concerned about controlling how people live than saving the environment? Data show that weather is not becoming more extreme, but the grid is more easily disrupted by weather due to its age, poor maintenance, and the increase in use of intermittent energy sources to generate electricity. Should this trend continue, weather may very well contribute to an increasing number power outages. Fox Weather should have taken a look at the real world weather data before promoting a propagandist organization’s false claims. If they had, they might have exposed illogic of the climate alarmist position and discussed policies that would actually improve grid reliability.