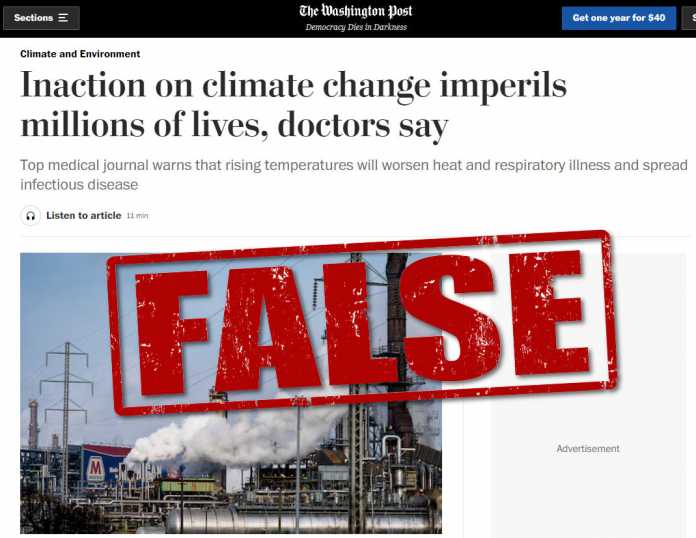 The Washington Post, among a number of other mainstream media outlets, covered a new report published by the medical journal, The Lancet, which claims climate change is causing illness, hunger, and premature death. The reports goes on to claim matters will only get worse unless governments take dramatic action to halt climate change. The Lancet’s claim, and thus the news reports parroting it are false. They are directly refuted by the most comprehensive studies ever conducted on the effects of climate change and mortality, published in The Lancet itself. Data from the United Nations also refutes The Lancet’s fear-mongering on climate change and health.

The Washington Post story, titled “Inaction on climate change imperils millions of lives, doctors say,” describes a report in The Lancet, titled “The 2021 report of the Lancet Countdown on health and climate change: code red for a healthy future.” The report and the news coverage of it are filled with hyperbolic claims falsely linking climate change to illness and premature death. Claims that are directly refuted by hard data.

“Climate change is set to become the “defining narrative of human health,” a top medical journal warned Wednesday — triggering food shortages, deadly disasters and disease outbreaks that would dwarf the toll of the coronavirus,” writes the Washington Post. “Rising temperatures have led to higher rates of heat illness, causing farmworkers to collapse in fields and elderly people to die in their apartments. Insects carrying tropical diseases have multiplied and spread toward the poles. … Droughts intensify, crops fail, hunger stalks millions of the world’s most vulnerable people.”

Each of these claims is false, with many of them being directly refuted by research previously published in The Lancet itself.

Research published in the July 1 2021 edition of The Lancet came to two clear conclusions: cold temperatures contribute to far more deaths each year than warmer temperatures, and deaths associated with extreme temperatures, hot or cold, are declining.

In the study, titled “Global, regional, and national burden of mortality associated with non-optimal ambient temperatures from 2000 to 2019: a three-stage modelling study,” 68 scientists representing universities and research institutes in 33 countries spanning all regions of the world, concluded as the earth modestly warms, deaths caused by non-optimum temperatures are declining by tens of thousands of people each years. The study states:

[T]his study is the first to provide a global overview of mortality burden attributable to non-optimal temperatures and the temporal change at a spatial resolution of 0·5° × 0·5° between 2000 and 2019—the hottest period since the pre-industrial age. We modelled the variation in the exposure–response relationship between temperature and mortality, reducing the uncertainties of the mortality burden, using data on more than 130 million deaths from 43 countries, which are located in five continents and characterized by different climates, socioeconomics, demographics, and development levels of infrastructure and public health services. The large sample size and its representativeness improved the generalizability of our results. We found that 5,083,173 deaths were associated with non-optimal temperatures per year. … Most of these excess deaths were explainable by cold temperatures.

Another telling fact is that regardless of the country or region—cold, hot, or temperate—cold-related deaths greatly outnumber heat-related deaths, the study found as seen in Figure1 below.

This study confirms what previously published research has consistently shown but climate alarmists have dutifully ignored or lied about: cold, not heat, is the biggest temperature-related killer, and illness and deaths related to temperatures are declining significantly. For example, a study published in the Southern Medical Journal and research undertaken by the BBC and staff at the U.S. Department of the Interior, all confirm more people die from cold than heat.

In 2015, The Lancet published the results of a large-scale temperature/mortality study in which the researchers found cold weather, directly or indirectly, killed 1,700 percent more people than warm or hot weather. The scientists examined health data from 384 locations in 13 countries, accounting for more than 74 million deaths. The authors of that Lancet study wrote:

[N]on-optimum ambient temperature is responsible for substantial excess in mortality, with important differences between countries. Although most previous research has focused on heat-related effects, most of the attributable deaths were caused by cold temperatures. Despite the attention given to extreme weather events, most of the effect happened on moderately hot and moderately cold days, especially moderately cold days.

Commenting on the 2015 Lancet study in a 2017 New York Times article, author Jane Brody wrote, “Over time, as global temperatures rise, milder winter temperatures are likely to result in fewer cold-related deaths, a benefit that could outweigh a smaller rise in heat-caused mortality.”

As discussed in previous Climate Realism posts, for instance, here, here, and here, and examined in detail in Climate Change Reconsidered II: Biological Impacts (CCRIIBI), global warming is reducing the incidence of cardiovascular diseases. Also CCRIIBI describes a vast body of scientific research which contradicts claims that vector-borne diseases, for instance, Dengue fever, Malaria, or the Zika virus will expand across the globe and intensify as a result of CO2- induced warming.

Concerning crop production and hunger as detailed in dozens of Climate Realism posts, data from the United Nations Food and Agriculture Organization proves beyond any doubt that for most crops in most regions and countries production has increased and hunger and malnutrition have declined dramatically as the earth has modestly warmed. This is in large part due to the increase in atmospheric carbon dioxide.

Agronomy and botany explain that crop production is increasing in large part due to the fact that growing conditions, for instance available rainfall and photosynthetic efficiency, have improved as a result of increased atmospheric carbon dioxide, modest warming, and improved precipitation.

Data conclusively show that deaths from all climate related causes have declined by more than 98 percent since the 1920s.

Neither illnesses nor deaths related to climate change are increasing. Shame on The Lancet and the mainstream media for lying about this.